Unitportdetect.pas is a Borland Delphi source code unit that lists parallel and serial port hardware resources in an easy and accurate way. The unit is used by various Lightning modules: inSerialMouse, inParallelPort, outParallelPort and outParallelPortMultiplex.

The unit is available for the public domain, with no copying limitations residing on the source code. If you develop an application using Borland Delphi that needs to enumerate parallel or serial port resources, this unit can be useful. The code was designed for Borland Delphi 7, but should work with any Delphi version that supports dynamic arrays (one user tested it with Embarcadero Delphi 2007). It detects the available LPT and COM ports in the system using various approaches. In most cases it will also detect the I/O address, IRQ number and DMA channel number of the ports.

For COM ports, the focus of the code is on detecting the associated hardware resources. If you don't need such information and you just need to list the COM port names, there may be better alternatives available elsewhere on the internet. The archive contains a ready to run demo application. Try it to see if the unit suits your needs.

The unit uses various approaches for detecting the ports:


Should one method fail, another method will be tried automatically. No administrator token is required, not even in Windows 10/7/Vista.

The actual detection is as easy including "unitportdetect" in the uses clause, declaring an "array of TDetectedPort" of the desired size and calling getCOMPorts() or getLPTPorts() with the array as parameter. The array will be emptied and each slot will contain information about a serial or parallel port. The functions return True if any ports were found, False if no ports were found.

The maximum number of detectable ports is up to your application with only small memory increase as the array slot count grows. Only with an array with 256 elements, the highest COM port COM256 will be detectable, like in the demonstration application. In Lightning the limits are set to a maximum of 16 serial ports and 8 parallel ports. 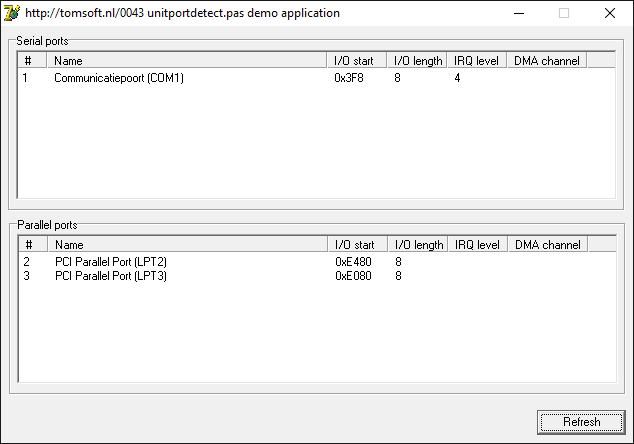